how to keep your garlic fresh: put it in dirt and forget about it (except for water)

The last couple weeks have been packed with seemingly insignificant progress. While I learned that the best and easiest way to keep garlic fresh is to sprout it, I haven’t had time to make a grow light, or construct an organizational scheme for the planting. In the mean time, as seen below, my lettuce plants are suffering.  According to several online sources, they are “too leggy” and this is apparently caused by lack of proper lighting. 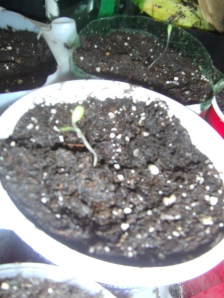 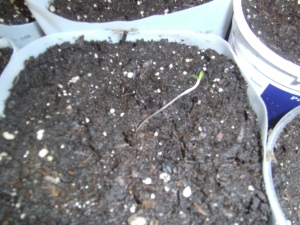 Also, as you can see, cut in half, gallon milk-jugs with holes sliced in the bottom make excellent medium table pots (and are readily available throughout the neighborhood on recycling day).

In other news, I solved my worm bin problem (they were all crawling out at night and dying on the kitchen floor). I bought a very fine mesh cloth for $2 and it seems that the worms are incapable of crawling on it. Since putting this in, not one worm has been found crawling up the sides. 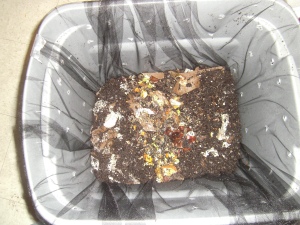 A side note: it’s taking a while to get the European Nightcrawlers to eat regular kitchen scrap compost. They wouldn’t touch it to begin with, so I started covering it in this “worm food” I bought from the worm dealer (which appears to be some sort of grain ground into fine flakes) and mixing this whole concoction with finely crushed egg shells. As soon as I added the egg shells, the garbage started disappearing.

Important Recommendations Based on Experience with Nightcrawlers so Far 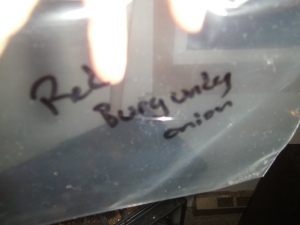 I ordered broccoli, pearl onions, and two-star loose-leaf lettuce off of the Territorial Seed company website. So far, I’ve only had time to plant the broccoli, but it immediately sprouted! By the way, these are open-pollinated seeds (all of the ones I purchased from this company). I’ve also received my seed order from Sustainable Seed Company, but have not had time or resources to plant any. This should change in about two more weeks and I’ll have more to update with. 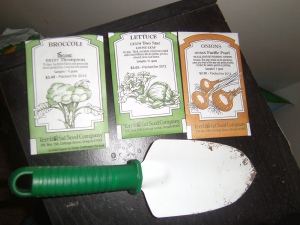 Territorial Seeds. The website sells them for less than the price listed on the packet. 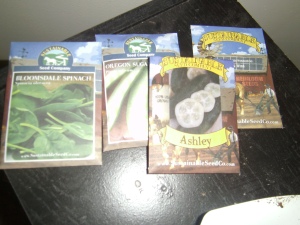 My European Nightcrawlers arrived a day before I thought they would and I had to throw this together at the last second. 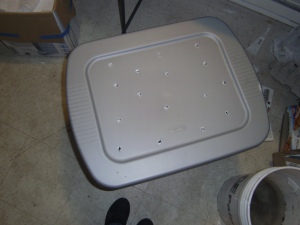 I forgot to put a cloth or something similar in it to prevent the worms from crawling through the holes. This resulted in the great worm escape of 2012.

All that dirt on the side is the result of them scaling the walls. Some  died on the kitchen floor, but the majority were put back in the soil and placed under light so they’d crawl back in. I’ve had the lid on ever since and now they seem to be congregating by the food and not trying to go crazy. The guy I bought them from (who sounded like Larry the Cable guy age 80 over the phone), said they would be kind of crazy for the first couple days until they settled down from the trip

In other news, I enjoyed my first “harvest” today. I took the tops off my some of my green onion and garlic plants. 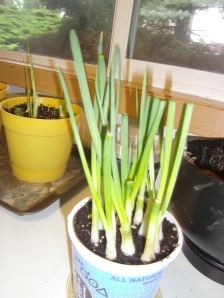 The trick to harvesting salad shoots from these plants is to cut at least four inches from the base of the soil. The rate of growth increases the taller the plant gets. The onions in particular, started with about 1/5th of an inch of growth a day. Now they are growing nearly a half inch a day and this rate seems to keep increasing the taller they get.

This guy covers just about every topic imaginable dealing with indoor and outdoor organic plants. Check him out! His videos have reassured me that I’m on the right track with this blog’s concept. 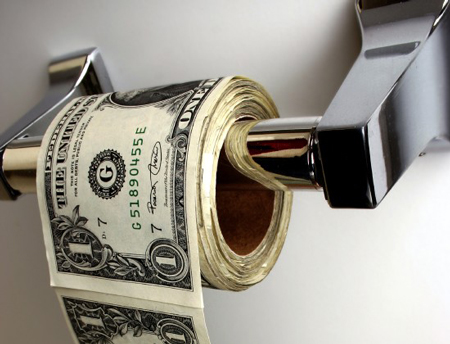 Today I realized I’ve spent ~$105 on start-up stuff. I didn’t keep the receipts (going to start doing that), but here’s what I have so far: 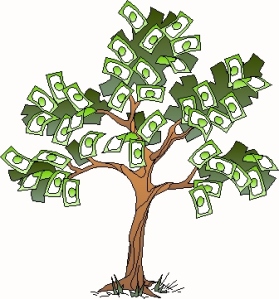 Update 4/8/2012: Okay, the solution is shown above- reuse old yogurt containers and any type of container you buy from the store (the lids can be put underneath to collect excess water.) Old baking sheets can also be used under the plants. Instead of transplanting into the store-bought containers I showed, you can transplant into plastic cups bought in bulk with holes cup into the bottom. For larger plants, you can turn old storage crates into garden beds by hammering holes into the bottom with nails and putting the container lid underneath to collect water. I will get a better picture of this and post it below when I transplant the lettuce into their largest container. You can also use a regular box with a garbage bag liner with holes poked in it for a couple plantings. When the box starts falling apart, you can transfer the liner into another box and use the worn one for worm food. 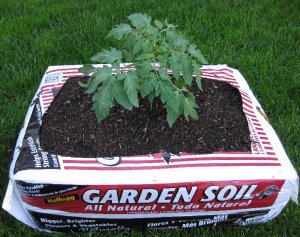 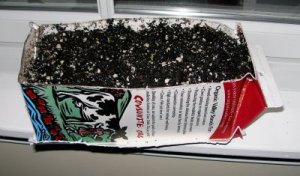 Some popular vegetable foods, like the tomato and potato, grow on plants that are extremely poisonous if ingested (this is why you shouldn’t eat a green-skinned potato that’s in the process of sprouting). If you were to try to cultivate one of these plants indoors and your kid or bird decided to sample it, the story would not have a happy ending. For this reason, I’ve constructed a list of vegetables that grow from toxic and non-toxic plants, so you can plan accordingly. DO NOT grow a toxic plant species where small children, animals, or “special” drunken friends might think to sample the green parts!!!